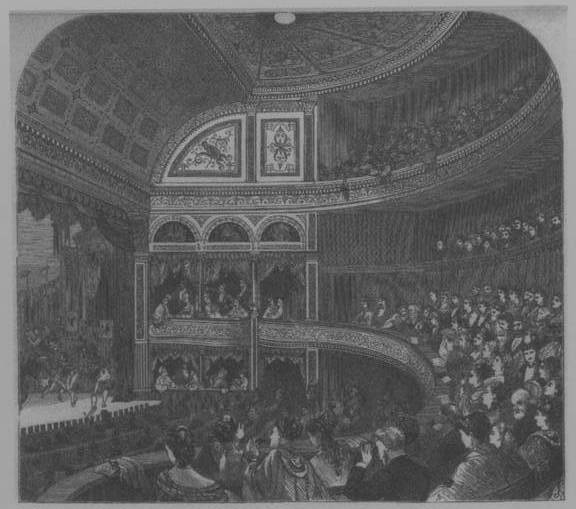 The Vaudeville theatre was originally built by C J Phipps in 1870 on the site of William Robertson's failed billiards club after he saw more profit to be made in theatre. Originally standing behind two houses, 403 and 404 Strand, it had a seating capacity of 1100 upwards, over four levels in a horseshoe shaped auditorium in a Romanesque style. Entrance to the theatre was via narrow corridors leading to the various levels and boxes, there being no provision for front of house facilities or, for that matter, much in the way of dressing room accommodation. Leased in 1870 to Thomas Thorne, David James & H J Montague it opened on the 16th April 1870 with a production of For Love or Money.

In 1882 Thomas Thorne became the sole lessee and in 1889 demolished 403 and 404 in order to expand the theatre onto the Strand. C J Phipps was once more commissioned, building a Portland stone facade overlooking the Strand, behind which he built a foyer block in an Adamesque style.

The construction created a centre archway with two side entrances. The doorways were recessed to create a porch six feet deep which could be shut off from the street by iron gates. On entering the foyer one would be met with the opulence of marble floors, the ceiling of ornamental plaster, whilst the walls were decorated in an elaborately designed Japanese leather paper in red and gold. This decor extended up the staircase to the Grand Foyer or Saloon Bar on the first floor. Like the foyer the Saloon also had an elaborate plaster ceiling, fireplace and fittings. Five French windows opened onto the loggia, formed under an arcade of five arches, which overlooked the Strand. Toilet facilities were also created at each level of the staircase. On the upper floors a Saloon for the Gallery was also constructed along with a suite of offices for the Manager, Acting Manager and Treasury. 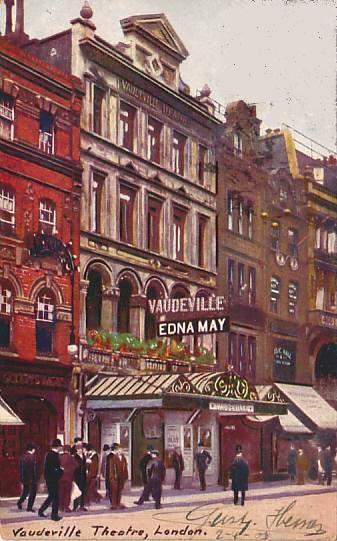 The auditorium also had renovations during this period. The seating capacity remained unchanged; however private boxes at the stalls level along with small rooms on either side of the amphitheatre were removed. The coving over the proscenium arch was removed and replaced with a pediment whilst a new ceiling was installed. New stalls seats were installed with sufficient space between to allow easy passage. The adopted decor was of peacock blue plush seating with French white and grey with gold on the walls. The private boxes had carpets and hangings of rose colour with greenish grey decor.

The theatre reopened on 13th January 1891 with a production of Woodbarrow Farm. The foyer from this period still survives to the present day.

In 1892 Thorne sold the lease to restaurateurs Agostino and Stefano Gatti who in 1878 had become lessees of the Adelphi theatre a few doors along the Strand. 1894 saw the lease pass briefly into the hands of Mr Weedon Grossmith before returning to the Gatti family in 1896.

In 1905 John Maria and Rocco Gatti took over management and in 1925 - 1926 undertook the remodelling of the auditorium and the provision of a dressing room block extending back to an Adamesque board room overlooking Maiden Lane. The remodelling was carried out by Robert Atkinson who retained the 1890s ceiling and coving of C J Phipps but installed a rectangular Adamesque auditorium. This was decorated in cream and gold on a blue - grey background. The theatre reopened on the 23rd of February 1926 with Archie de Bear's revue RSVP.

The rebuilt 1926 auditorium can be seen in the contemporary photograph taken from the 'Architects' Journal' of 19th March 1926. 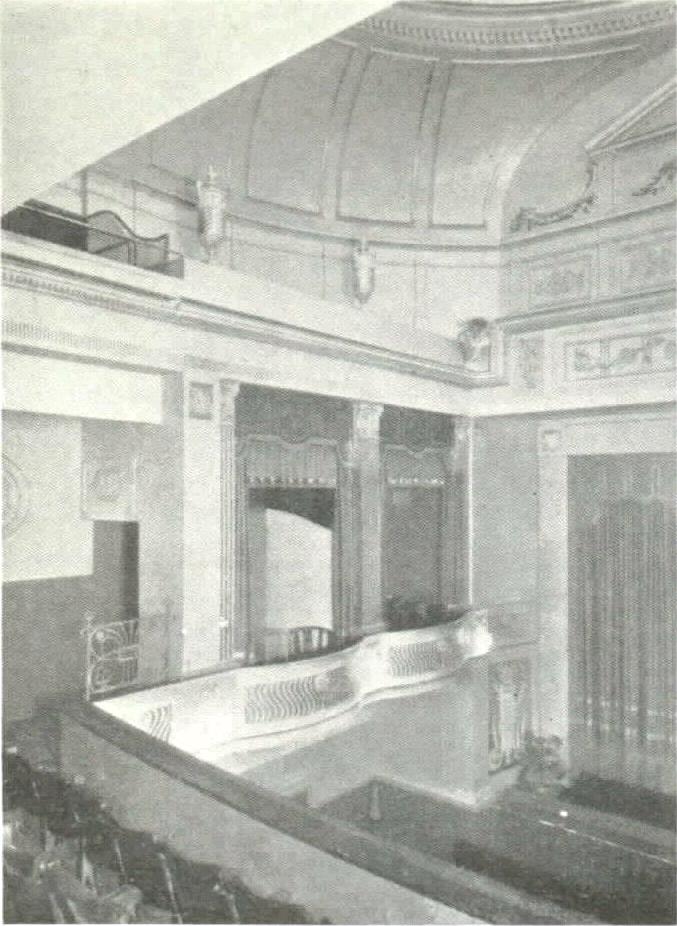 In 1968 the theatre was threatened with closure. Under a plan of the Greater London Council (GLC) the Vaudeville along with the Adelphi, Garrick, Lyceum and Duchess theatres would be demolished to allow for the redevelopment of the Covent Garden area. The Save London Theatres Campaign was formed in 1972 in response to this plan with the backing of Equity, Musicians Union and other interested parties. That the Vaudeville and the other aforementioned theatres still survive is due in no small part to this campaign.

The Gatti family sold the theatre in 1969 to Sir Peter Saunders, who in 1970 commissioned stage designer Peter Rice to redesign the interior. He gave it a more theatrical feel of a time before Atkinson. The colour scheme involved a lot of plaster-based green marbling and a deep red wallpaper with a bold pattern in gold. The plaster work along the front of the circles was also changed. Though this is not very clear in the photograph from 1970, the difference can be seen by comparing the 1926 and 2004 photographs. The exterior of the building was also altered slightly by making the loggia an integral part of the bar; the balcony edge having windows placed into it, thereby making what was an outside area into an inside area attached to the dress circle bar.

The entire house had new carpets and seats fitted, the upper circle having the more traditional type of seatback to that in the stalls which had a thicker cushioning. The existing seating layout particularly in the front stalls area gave concern to Sir Peter Saunders with regard to sight lines. Variable widths of seating were used to address this problem which kept the ends of rows inline with each other, rather than staggering the rows in entirety which would have resulted in ragged ends and been contrary to regulations. 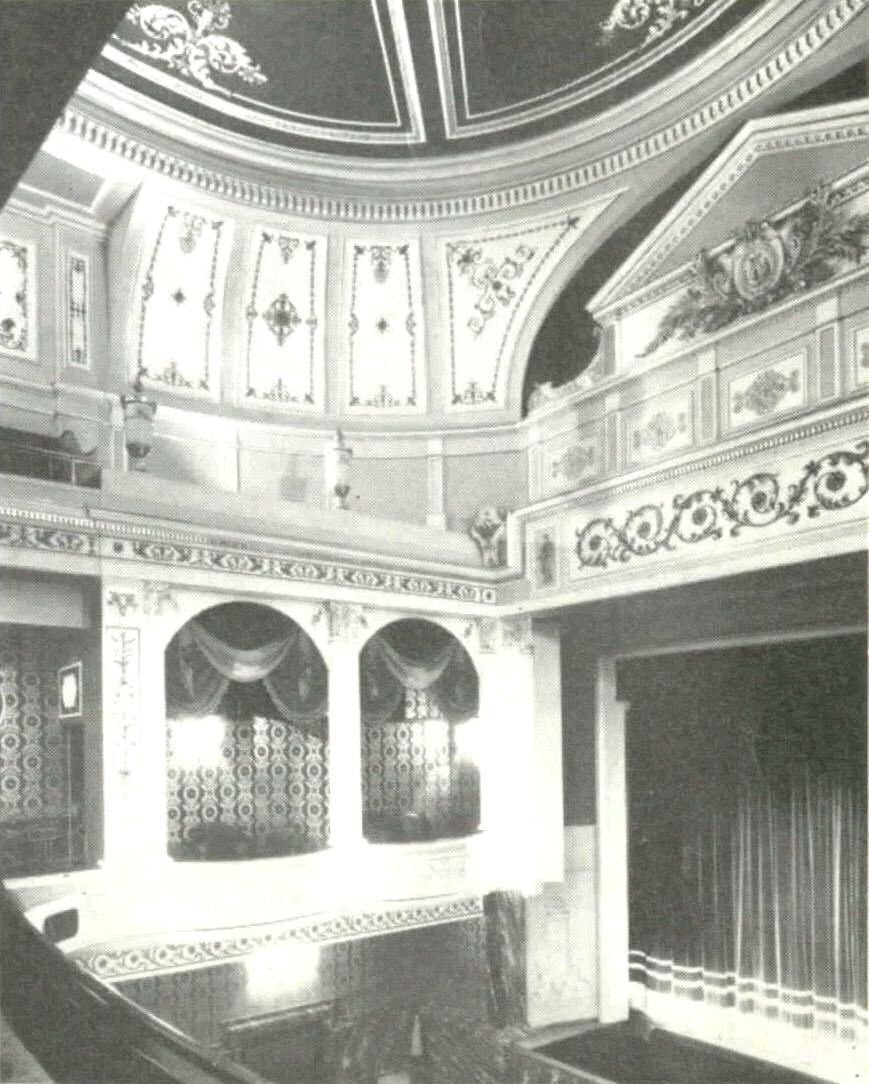 As part of the refurbishment at this time and under the direction of consultants Joe Davis and Ian Dow, Strand Electric, as well as providing the new seating and carpeting for the auditorium, undertook to update the backstage electrical installation. A counterweight flying system was also added along with an orchestra / forestage lift.

In 1983 ownership of the theatre passed to Michael Codron and David Sutton who purchased the theatre from Sir Peter Saunders. It remained with them until passing into the hands of Stephen Waley-Cohen in 1996.

Today the Vaudeville theatre is a grade II listed building and now owned by Max Weitzenhofer who acquired it from Stephen Waley-Cohen in 2002. The deep red wallpaper with its gold design and the plaster marble work no longer adorns the auditorium. A gold fleck wallpaper and simple blue grey paint is the current decor. The auditorium accommodates 694 in raked seating over three levels and four boxes at the dress circle level. Three licensed bars provide refreshment, although these may not all be in use depending on the production and whether there is an interval.

Behind the proscenium arch the flying of scenery is operated from concrete fly floors using a combination of hemp and counterweight systems. A rare early leather thunder drum approximately six foot square by one foot deep still exists as an example of early sound effects. The grid once had drum and shaft mechanisms of four foot diameter. In the cellar beneath the stage two corner traps survive.

Future plans for the theatre are to improve access and facilities for both abled and disabled visitors. This may mean completely new toilets and improving access to all seating levels. Improved Box Office facilities may also figure although no plans have been finalised.